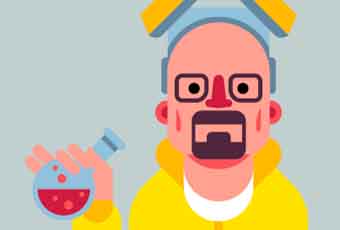 Could a chemistry teacher really make drugs like Walter White in “Breaking Bad”? How long will it be before we have Star Trek’s
teleportation? And what is the best way to react to an epidemic of zombies as in “The Walking Dead”? How does the climate work in Game of Thrones? It is possible to talk about science even sitting comfortably in an armchair in front of the television. From an innocent pastime, TV series have become real cult products. Millions of fans watch (or download) dozens of TV series. The most
famous ones are science fiction, medical or investigation series, which have a lot of science in them. What is true in what they show? From the birth of the cosmos in “The Big Bang Theory”, via the Fantadiagnoses of “Doctor House” and the alien complots in “X-Files”, to the nature of time in True Detective, “Science in TV series” reveals the hidden side of our favourite shows, in a simple language withexplanations that everyone can understand.

Andrea Gentile, a journalist, writes about science, culture and current affairs for the magazine Wired Italia. After a degree in computational neurosciences and a master’s degree in scientific communication, he was on the editorial board of “Galileo” and RAI Radio3 Scienza. In 2014 he published “Science at the beach” for Codice Edizioni (published in Germany and Greece, it reached 13th position in the German rankings of non-fiction).